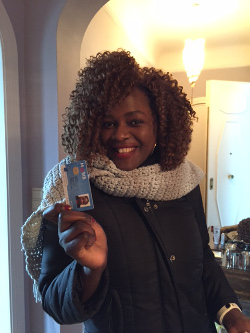 Flavia knows where to find a Villo station to drop off my rented city bike. I follow her from Brouckère, where we met up, to the Bourse. We introduce ourselves on the way there. The interview was planned for March 22, but on that day a storm of insanity hit the city. Now, two days later, we see the people of Brussels mourning in front of the Bourse building, under the watchful eye of international news media. "This would look completely different in Uganda," Flavia says. "Everyone would be crying. There would be sad music, like goodbye songs, so the few people who aren’t crying yet would tear up anyway."

Flavia is charming and quick, almost making me forget the fact that she has lived in Belgium less than a year. Eleven months ago, at 23 years of age, she arrived by airplane from Uganda, alone. Without further ado, she was locked up in Caricole, the closed centre attached to Brussels Airport. "The centre was round, like this room", she gestures the walls of the centre onto the coffee shop we chose to take the interview. "We ate there in the morning, and over there I’d be watching the planes arriving and leaving."

Flavia applied for asylum in Belgium. The Immigration Office interviewed her to ask for her reasons, but her experiences in Uganda kept her from trusting the officers. She held back what she considered personal. "Back at the centre, the others told me I made a big mistake... I had to trust those people, I had to tell them everything." So she changed her story. "Some of those things, I thought, why should I tell you? The worst thing was they didn’t believe me."

Weeks turned into months: four months and two weeks in total. Her time in Caricole made her mind numb. "I couldn’t see clearly anymore," she says. "I met a fellow Ugandan. He was married. He listened to me. We talked a lot." The man used her bad prospects to put pressure on her. "What are you doing here? You don’t stand a chance. That’s what he was saying." He proposed to marry her, offered her a job at a café. Flavia said she’d consider it, but in the end she broke all contact with the man. "Sister Marie-Françoise told me the ’café’ he was talking about is not a café where I’d serve coffee."

Sister Marie-Françoise works with JRS Belgium. She is one of a team of visitors who seek to support asylum seekers in detention and follow up on their procedures. Flavia and the sister built up a relation of trust. "When sister Marie-Françcoise told me that man had different intentions, I believed her." Shortly afterward, she was caught in the most Kafkaesque statute of Belgian asylum law: her application was rejected, but the procedure did not allow her removal from the country. She became Unremovable: not authorised to live in Belgium, she was unable to return to Uganda. "Who knows where I would be now without the sister." Once again, I have trouble imagining Flavia differently from the way she sits before me: well-dressed, full of life, confident. But at that moment, she came very close to another life: no place to call home, no documentation, no power to improve her situation.

Sister Marie-Françoise knew about Up Together and pointed Philippe to Flavia. Together, they thought up a plan: for two months, Flavia would live with a family or community in Brussels. Then she would move to another host. Why just two months, I ask her. "I wanted to stay with Brigitte for another month after I lived there for two. She asked me to stay." But after coordinating with Philippe, she agreed to move after all. "If I had stayed with Brigitte, I wouldn’t have met the others! I still visit often, on weekends. Brigitte is a single mom. Her little boy asks after me!" She shows me a photo of a two-year-old boy in a onesie. Flavia is still in contact with other former hosts too. She’s building a social group in Belgium, finding opportunities. 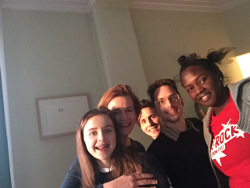 Flavia now lives with another family in Elsene. It’s a big family, like her own back in Uganda. Thoughts of the folks back will carry melancholy for almost every migrant, and Flavia is no exception. "If they come to Belgium and have to go through the same thing I had to go through in Caricole, I don’t want that", she says with a grimace. But just as soon, the winning smile returns. "If you end up on the streets in Belgium, with no papers, you have nothing. In Uganda, you don’t need licenses or papers for everything. We used to grow oyster mushrooms to eat and sell. That was my hobby."

Besides growing mushrooms and work, Flavia found the time to study in Social Science in Uganda, and she wants to obtain her Master’s diploma in Belgium. She’s surprised when I tell her she can study in English here. Flavia takes up everything she sees and hears, soaking up Belgian life and our languages like a sponge. That’s how she’s able after just months to tell me where I can stall my bike. Call it integration in depth: Up Together offers Flavia not just a place to stay, but friends with whom to share the trust one needs to find a home.

Flavia’s lawyer, is filing a procedure at the European Court for Human Rights to get the rejection of her asylum application rescinded. The outcome is still unclear.